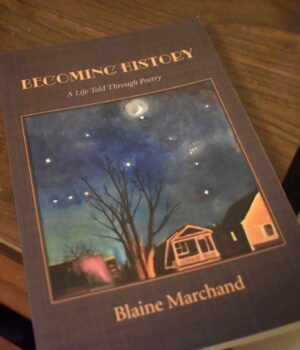 Blaine Marchand’s new book, Becoming History: A Life Told Through Poetry, is a collection of poetry detailing the life of his mother, Kathleen Dorothy Marchand.

When asked what prompted him to choose poetry, he replied: “My grade seven teacher.”

“I was writing stories, mostly about animals, I had a teacher, Ms. Davis, who loved poetry, and encouraged me to write poetry.” Marchand said.“I became fascinated with how you could tell stories through imagery. I started writing poetry and just kept writing.”

The book contains three parts; stories from Kathleen’s childhood and her abandonment by her birth parents, The Harrises, and adoption by the Irishes, her discovery of her lost brother and reconciliation with her family, and the final conversations and moments between Blaine Marchand and her in Grace Manor, in Ottawa.

“The book started with the third section, because my mom went into Grace Manor, I’d go over every day and we’d chat, and she’d want to watch the news, and she’d talk about her earlier years.”

He specifically recalled when he discovered his mother’s history one day in his youth.

“She was doing the dishes, and she put her wedding wing and engagement rings on the ring, and I noticed it said ‘Irish’ on me, and I asked about it, and she said “well, the Irishes adopted me, and my parents gave me up.”

“That’s where I had to do the research was my mother’s family.” he said:

“I looked up her baptismal certificate, both her and her brother Bob were baptized in 1913.

“My mother had a very good memory, when I took her for drives into Ottawa East, she’d talk about the various families there.”

“I always wondered where my passion for gardening came from since by parents weren’t gardeners, my great grandfather was a gardener.”

The poems detail many of her experiences growing up in the Ottawa area.

“Where she grew up with the Northern part of Echo drive, overlooking the town.”

Marchand also pointed out a connection between his mother’s story and Cobden, which he has submitted and is published alongside this.

“Where we grew up there were the railway tracks running along Scott street, and then the Ottawa River. That area was owned by a family that lived in Cobden, Daniel Crowley”

He said that much of the book talks about the trauma she experienced and how it resurfaced at the end of her life, before her death at 104 years of age in 2016.

“My mother was someone who just said “I just wanna get on with my life.” Marchand said. “She was still haunted by the fact that her parents gave her up. When she was an adult, suddenly they appear. Even in the letter [included in the poems are five letters, printed verbatim], there was euphoria, but they were strangers to her, they gave her up.”

“It was part of her that perhaps came more to the surface when she was older and she was reassessing her life.” he said.“Despite what they said, she probably never forgave them.”

“Everyone she had grown up with were all dead. In a sense she was alone.” he said. “There was bitterness, she was a very positive person. She was someone who embraced life.”

“One interesting thing is that when we were growing up, when she referred to the Irishes it was always “Mr. And Mrs. Irish, but at the end of her life it revered to “Mummy and Daddy.”

He said he’d like to research the other side of his family in the future.

“My father also had an interesting life.” He said.

He said that family histories are important parts of one’s lives and connection to their communities.

“I certainly relate more to the Irish side of our Heritage than the French, we spent summers in the farm up by Ashdad. “ he said.

“We used to go to Douglas all the time to pray where my grandparents are buried, my wife was buried there.”

As he says in his article, he finds it interesting he’s wound up so close to a place important to his mother. He lives in Ottawa, but comes regularly to his home in Osceola, south of Cobden.

“We’ve been in Osceola for 24 years now, it feels very much like home.”

Alex Got Lost: My First Fair in a Long Time