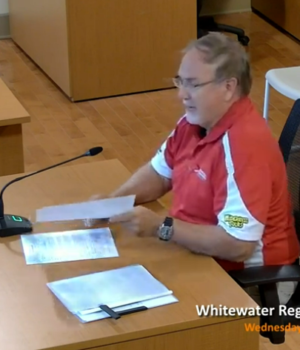 Disclaimer: Joe Kowalski, who features in this story, owns the Whitewater News and employs the writer and editor of this paper.

“We have prepared this letter and the enclosed information in order to pre-consult with the Township of
Whitewater Region regarding a land severance proposal for waterfront residential lots along Voyageur
Bay Trail. Specifically, this submission requests the following:

“it was felt before we went through the lot creation process, we should have council’s permission.” Whitehead said.

He said Kowalski had improved both roads.

“The development is reaching a threshold where the hydro is able to make improvements, and also Joe plans to make additional improvements” he said.

The Natural Heritage Field work study was completed due to the seasonal requirements.

“I’m not against cottages, I’m a developer, I’m a capitalist, but this is the last wild section of the river.” Kowalski said.

“I decided to do it myself, it’s an expensive undertaking. I used the proceeds for Voyager bay to do this undertaking. It is my gift to Canada.”

“What guarantee do we have that hydro will go through. “Councillor Mackay said.

“Well, why can’t we get the hydro and then the agreement?” Mackay said.

“I have been dealing with Hydro one for five years, and I can tell you it’s a difficult process, and they’ve yet to provide me a price.” Kowalski said.

“Would be able to get our emergency vehicles in there,” Councillor McLaughlin said.

Kowalski said that they had had a fire down there, and there had been “not difficulty with emergency vehicles.”

Councillor Charlene Jackson asked “what steps are next? Does council need to pass a motion or can we direct.

“The next steps would be for Staff to bring back a report for Council.” Ivan Burton said.