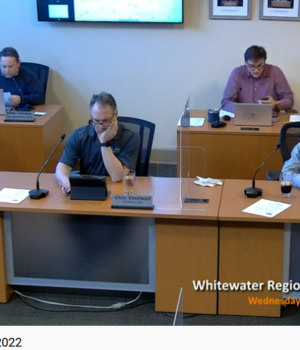 The Council of the Township of Whitewater Region authorized a debenture by-law for the Freightliner Tandem Plow Truck.

Treasurer Sean Crozier said that the debenture had a 3.35% interest rate over a five year term, with annual payments ‘just north’ of $65,000.

He said that the annual repayment limit for interest and principle payment able to be put towards debt is $840,000.

There were no questions and the motion was carried.

The Council of the Township of Whitewater Region approved a tile drain loan application from James B. Bauman in the amount of $22,200, for approximately 8 ha. at 1606 Kerr Line.

Clerk Carmen Miller said that the loan was for $22,000 dollars to replace and repair tile drains, and that the township includes a cost of $300 for an inspector to inspect the tile drain work.

Councillor Nicholson asked if the tile drain inspector inspected all drain work or just tile drains, which Lane Cleroux confirmed that the inspector was specifically for confirming the work specified in the loan was done.

The Council of the Township of Whitewater Region approved a sole source contract to Onserve Inc. for the upgrade of the server.

Clerk Miller said that Onserve was the Township’s external service for IT services said that their server was now obsolete due to being five years old, and the cost to provide support was “no longer viable.”

The Council of the Township of Whitewater Region received the draft Swimming Pool By-law for the purposes of public consultation.

There were no questions and the motion was carried.

The Council of the Township of Whitewater Region approve the entering into a two-year agreement renewal with the Ontario Clean Water Agency (OCWA) commencing November 12, 2022.

Superintendent Steve Hodson presented Cleroux’s report that OCWA had been operating the Township’s three water treatment systems and water sampling since 2013, handling staffing and management and quality of the water systems.

“OCWA has been exceptional and paramount in getting our new sewage plant up and running, getting it up and running from an operations perspective.” he said. “I don’t think we could have got it up without them, to be honest.”

He reiterated that all the listed costs OCWA provided were fixed costs, and if the Township were to switch to self-management they would inherit the cost.

Councillor Mackay asked if the Councillors were accountable for the water system if they were to run the system itself, which Hodson confirmed they would take on that liability.

Councillor Olmstead asked if the cost of operation had anything to do with consumptions.

“The cost of operating will be the capacity of the plants and indirectly the number of hookups. It’s chemicals, it’s salary, it’s all the administrative stuff that we don’t do anymore, compliance, and the drinking water quality management standard” he said.

He said the quality management was a ‘one-person job in itself’.

Cleroux clarified that the costs largely arouse from the ‘chemicals used’ rather than staffing, and the increase for more users was ‘not drastic’.

Reeve Cathy Regier said she “would be in full support of this agreement. I think they do an outstanding job.”

“I think it’s smart use of our tax dollars to make use of this organization.” Councillor Nicholson said.

CAO Trembley said that other options would be more costly, and require ‘significant staffing increases’ that was not a good use of resources “when we are well-served by OCWA.”

Councillor McLaughlin asked for clarification on what the ‘cost-plus’ pricing meant, which Cleroux clarified meant that OCWA would provide a budget, and refund any money they did not use of that, or require Township to pay anything over that.

The Council of the Township of Whitewater Region declared the property legally described as Part of Lot 19, 20, 21, 22 and 24 on Plan 49R-4397 surplus to the Township’s needs and authorize its sale to Susan Berg for the purposes of lot addition.

Clerk Miller said that the Township agreed to sell the land as of a meeting February 3rd 2021, at $75,000 for both parcels.

There were no questions, and the motion was carried.