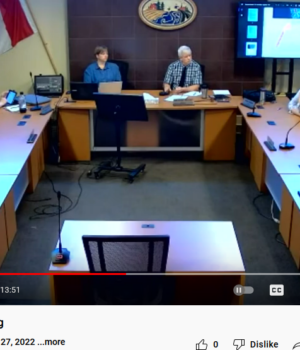 The Council heard a recommendation that Council of the Corporation of the Township of Whitewater Region approve the acceptance, assumption, dedication as public highway and naming of the lands described as Part 5 of Plan 49R-2682 and Part 4 of Plan
49R-20028, part of Alva Drive.

Planning Manager Ivan Burton said that these motion will close out three severances filed by Mr. And Mrs. McLaren, in order to transfer the privately-owned road to the Township and to be dedicated as Alva Drive.

He said that a cul-de-sac would also be transferred to the Township.

Councillor Mackay asked if the road was ‘up to snuff’.

“I can’t speak to the condition of the Road. I will make a note that the cul-de-sac is not constructed yet.” Burton said. “The township’s responsibility as part of this transfer of land is to construct the cul-de-sac.”

Roads Department Manager Lane Cleroux said the road was constructed “previous to the five lots on the lakeside.”

“What I think happened here was that it was missed, it wasn’t transferred at the time that the lots were created.” He said. “Alva drive is not in great condition. It will have to be resurfaced in the years to come. One thing we’ll put in the budget for the next year is the actual DST of the cul-de-sac, and which staff will potentially put in the budget the remaining of Alva Drive at the same time.”

Councillor McLaughlin asked if this process was “a normal thing that we do.”

“I think the developers usually handle that” Cleroux said. “I think in this case it would be beneficial to the Township to have a cul-de-sac, and the McLarens have been generous to allow the plow trucks to turn around on their land. The turning radius is already half-built there.”

Cleroux confirmed to Councillor McLaughlin that this “was a not a planner subdivision” to the Councillor’s concern that this would establish a precedent for future land transfers.

There were no further questions, and the motion was carried.