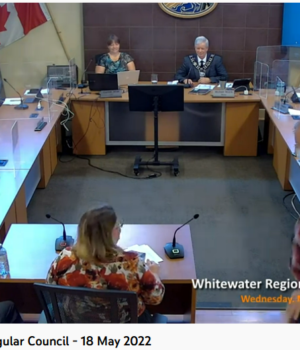 The Council of the Township of Whitewater Region approved the 2022 tax rates as presented.

Councillor Mackay pointed out that there was no police listed on the rates.

“Technically police falls under the township portion.” he said. “One sixth in a good estimate but I’d have to check my files for that.”

Councillor Nicholson said that police should be included as a separate fourth section.

“It’s almost like a levy. We have no choice in that.”

Reeve Regier said she “had a concern it will be seven years before they do anything with this technology. I’ve got a concern that seven years is going to come back and bite us.”