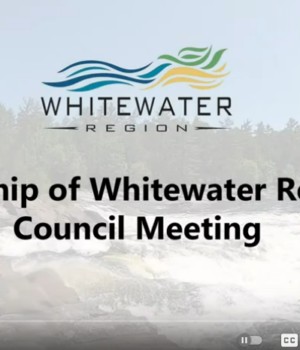 The Council of the Township of Whitewater Region heard a motion to:

“We have an opportunity to increase service level.” Environmental Services head Steve Hodson said. “Funny enough, it’s come full-circle. Before amalgamation, we were part of Renfrew’s hazardous waste program, and we found they were not well-used at all. We started having our own events twice a year. Those events have been getting busier and busier.”

“Unfortunately to allow us to be part of the program, they need to amend their ECA for the waste0side. Hopefully we don’t have to go down that road as it can be quite tedious and lengthy.”

He said that the Township was have a hazardous waste event on May 7.

Mayor Moore asked if this was to join the program this year or next year.

“It’s all based on their ECA.” Planner Lane Cleroux said. He said the township had began the process last fall with LEG, and that the Town of Renfrew “wanted them to join” having already sent a letter to the MPP.

Councillor Jackson said she “had a concern” with Whitewater residents having to travel to the Renfrew site, that they “weren’t going to get right pairs attending” at their site.

Councillor McLaughlin asked if the Council had tried a similar program before.

Hodson said that when he started, he said the sites “were not heavily used” which prompted the Township to organize their own events.

“I’m much like Councillor Jackson; maybe it’s cost effective, but we’re disposing of it the proper way, but i don’t think dollars can be put into that. I’m really reluctant in going this way, because we’ve had such a great turnout. It may be more work, it may be more expensive, but it’s disposing of the stuff the way it should be disposed of.”

“I just at this as an opportunity for our rate-payers to get rid of these materials several months of the year rather than twice a year.” Hodson said.

CAO Trembley said that the current Township costs were 30-40 thousand dollars for “two days for six hours, versus four days a week for a number of months.”

“I would say for their services, our residents would go outside [of the Township].” CAO Trembley said, saying that many residents go to “have to access services that aren’t available in our Township” in Renfrew and Pembroke.

“It would be true if we were sending people where they don’t normally go, but I know that there are a lot of residents of Beachburg area, of Cobden and of Westmeath that go outside of the township for groceries and whatnot.”

“We won’t decrease the service without coming back to council, but this is an increase of service with a decrease in cost.”

Cleroux said that they saw an ‘increase of products’ every year in the waste events.

Councillor Nicholson said: “I think it’s a great initiative and a great way to save money. I just want to be sure that people won’t take a shortcut and may not dispose of it property.” he said. “I’d hate to turn of this level of service at this level of time.”

“I would hate to see that waste going where it shouldn’t. Yes, I would proceed with this, but the transition phased over the course of a few years.”

Hodson said that they did have two events scheduled this year, in spring or fall.

Councillor Olmstead said that he ‘liked the initiative from a business perspective’, saying that paint retailers were encouraged to take back unused paint cans and dispose of them..

“The options for hazardous waste disposal are often few and far between.” in rural Canada, he said. “I would like to tell customers that they can just drive up the road.. I think I would like to try it. I think it will take a bit to catch on, but I think it’s a worthwhile initiative.”

Councillor Mackay asked why oil cans weren’t taken in recycling, which Hodson said was due to the ‘residue’ of the oil inside them.

“The cans are made of oil, you know that right?” Mackay said.

Hodson said he knew, and Mackay said that the reason was ‘disappointing’.

Councillor Jackson asked if there was a time period for locking into the program, which Hodson said no.

CAO Trembley said that the township needed to come back to finalize and formalize the agreement once they’d decided if they wanted to go with it..

Councillor Jackson asked “if we do go to the town of Renfrew, are they going to be tracking the amount of household hazardous waste coming from the Township of Whitewater region.”

“I would assume so.” Hodson said.

“That would be the only way w would be able to tell if it was beneficial to our rate-payers.” Jackson said, saying he was not sure about going back if it was not being used originally. “I think it’s a great initiative, but i don’t know how it’s going to be received.”

Mayor Moore suggested an annual report be sent to the Township from the Town of Renfrew about the amounts of waste.

Councillor McLaughlin also echoed Jackson’s concerns with how long the Township would be locked into the program.

“It’s one line on the ECA allowing us.” Cleroux said, and said that Renfrew amending it could take “nine to twelve months” to get done.

“By the time the ECA gets done, Yakabuskie is a miracle worker”

Councillor Jackson asked if they could track the usage for this before committing to an agreement.

She moved to defer the ruling to the first council meeting in May.

Mayor Moore then called for a vote to defer the vote, which was then carried.