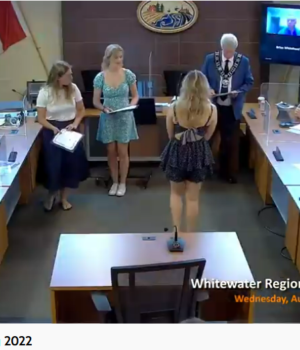 Nicole Moore, Planning Assistant and Student, reported that she and a fellow student, Wayne Brady had done analysis of parks as part of her fourth year study, and created a report that evaluated

“The selection of parks was based on three factors.” She said. “The first is what the township considered to be parks. Second is whatever parks were planned to implemented. Third was natural spaces visual by aerial photography.”

She highlighted the first of her six recommendations “They would benefit from the implementation of bike racks, improved signage to highlight park entrances and key information for park visitors, and increased seating accommodations for users.”

“These recommendations are meant to enhance the lives of the local residents.”

She also noted that there were limitations to the study, such as being limited to one semester, or five months, due to their status as students and their localization in Guelph.

“This is certainly something that is needed in Whitewater Region.” Councillor Jackson said, noting that section 9 and 11 on her map needed to be switched.