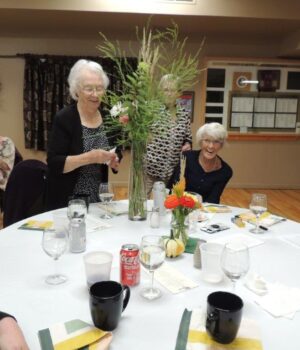 The Whitewater Historical Society (WHS) celebrated its 37th anniversary at the Westmeath Community Centre November 17th, which was originally planned to be its 35th one but was postponed due to a Covid shutdown.

Those entering the hall were greeted by Zoe McMaster (Secretary of WHS) and Mark Campbell at the ticket desk. The decorations in front of the stage of strategically arranged pumpkins, corn stalks, bales of hay and of course assorted artifacts caught ones eye immediately. Inside, there were nice arrangements on round tables for the 80 or so members and guests. Dinner of roast beef with gravy and chicken with white wine and mushrooms was being prepared in the kitchen by the WDRA’s kitchen staff.

Meanwhile there was background music provided by Jocelyn on the piano and Bradon Smaglinski on the fiddle. Simon Tunley mentioned that those two could pick up new music 100 times faster than he or me.

Janis Thomkinson opened the meeting with a warm greeting to everyone in attendance. She gave due praise to Evelyn St. Amour for efforts in her membership role for signing up 30 new members and always promoting the museum.

Mayor Mike Moore a great supporter, welcomed everyone on behalf of the township. He and Daryl McLaughlin were the councilors assigned to the WHS and alternating to attend monthly meetings. Mike said, “The progress of the society had really opened his eyes to the good work being done.”

Lawrie Barton, the Curator spoke next. She told of a small group back in the 80’s gathered to explore ideas and collect artifacts which was the impetus that led to what the museum is today. She also called out the names all those members with respect who had passed away.

Only three chartered members remain, Hazel Hawthorne, who it’s said has never missed a meeting in those 37 years, Joanne Pratt and Lawrie Barton. All three thought it important to collect artifacts which led to a vision as we now know had amazing results. They were each presented with a lovely bouquet of flowers.

Lawrie mentioned Joanne Pratt as a “dream” of a gardener and a 4-dimensional one at that, the fourth dimension being kindness. She also had an artistic genius for the way her plants arrived at the right times and with colour coordination.

Beatty Pilgrim was recognized for building a new pergola leading at the entrance to the pathway down the hill..

Dixie and Murray Dittburner were members of WHS for 16 years. They relocated to Kingston after that but came tonight to each tell their own version of a “Walk Down Memory Lane.”

One of Murray’s memories was in 1995 when an advertisement was placed to find a log home for sale. It led to one being donated, moved from Muskrat Lake and rebuilt by volunteers and on acquired property. He recalls the fundraising for the project. The museum opened Canada Day 1996. After that St. Aidan’s was acquired. Extensive work by volunteers restored this local landmark to its former beauty as a sanctuary. The early history of pioneers was of special interest to Murray.

Dixie spoke of the guided tours around Foresters Falls drawn by a horse and wagon. It was quite popular – I had two rides on it. For some years there was entertainment at the front of the building – dancing and singing. She feels that Ross Museum is a jewel of a place for a museum to be. Dixie hopes all the good work will be kept up.

The winners of the bidding for the decorative wreaths were Lenore Haycock, Murray Dittburner, Judith Humphries, Drew W. Vereyken and Beatty Pilgrim. The total amount raised was $250.

Janis came to the microphone to thank everyone for coming out, in particular Brenda Grady and Margret Gervais from the WDRA. She then announced to line up for dinner. No one missed that comment. The dinners were excellent and rounded out a perfectly planned and enjoyable evening. Ps: only three years until the 40th celebration.