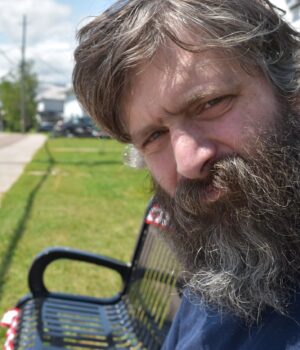 I went to the Beachburg fair for the first time this week.

I talked last week about how I haven’t been to a fair in a long time: decades, even. I’ve been away for quite a while, and walking around the rides and crowds again made me feel oddly nostalgic.

Fairs are a time to celebrate the rural lifestyle; to show off years of work and skill, to celebrate volunteers and unwind from the difficulties of summer. It’s a moment of levity in a stressful and dicey time.

Watching the horses pull concrete blocks across the ball diamond, I was struck by my own disconnection from that community. I grew up on a Micksburg farm, true, but one largely run by a single man, and done as a hobby rather than a lifestyle – an old remnant of a different time. I never rode a horse, nor drove a cart with one, and I doubt I would want to. But to see these beasts mill about, ignoring the stroking of passersby and charging forward the the commands of their handlers in the diamond, one can’t help but appreciate the work that goes into it.

As I sat there, the heat was relatively mild – the heat wave of earlier in the week hadn’t totally gone, but the evening air cooled it. People sat about with their concessions and children excitedly running about, as horses took turns pulling the 5000 pound boat of concrete as far as they could.

The speakers at the podium talked about how rough it had been over the last two years, and how this 165th fair was a welcome affair. From the laughing faces I saw around, people without masks or forced apart by distancing, it seemed that everyone agreed.

It was not without complaint. The Saturday demolition derby faced an annoyed response on Facebook from Dave Dagenais:

“Hire a promoter who inspect the cars and have rules to build too..also your loader operator chooses who’s car he loads..he wouldn’t help me load my car (even when I offered to pay him) after the show with all my personal belongings..we drivers paid 62$ to provide entertainment and win no trophy for the finals.you should really look at the other valley fairs like Shawville,Renfrew,Almonte,Carp they all hire a professional company to handle the derby to make it safe,fun and fair and loader operators who are willing to help the drivers get the cars back home!”

The Fair account responded and requested to talk to him about his experiences.

The fair honoured two lifetime volunteers, Marilyn Robinson and Lois Dougherty, but also called for more volunteers, students who needed volunteer hours to graduate. They talked about the future of the fair, and scholarships offered to students [see Page 4]. The focus on the young was apparent, even as they honoured longtime individuals.

Fairs always feel like they are for the young. Teenagers and children riding rides, winning stuffed toys, marveling at animals (“I feel bad for the horses”, one child said behind me during the drawing competition”). This is a way to interest them; to get them fascinated in a field that is dismissed as for the old, that often falls outside of much of the major decision making compared to the more populous cities.

I got welcomed in with some aid from the door staff so that I could cover the fair – and while I spent my time taking pictures, I’m glad to see everyone enjoying themselves once again.