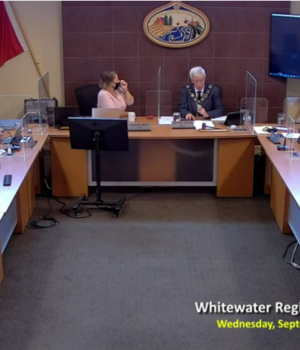 The Council of Whitewater Region received a report from Environmental Services head Steve Hodson, about the plans and difficulties with the Council’s plan to open all three arenas for the winter season.

Hodson said that the plan was to operate all three of Whitewater’s Arena’s facilities, and that the Province’s original three-step plan for opening was abandoned and replaced, which “has implications.”

He said there were also multiple structural issues with the various plants, such as a brine leak in the Beachburg Arena.

“The brine leak results from a historical issue with the drain pipes. With this brine leak, we can’t make ice.” He said.

He said that in Westmeath that there was one main issue with water pressure.

“One of our wells has failed us.” he said. “We had McKinnon come in and assess it.”

He said that they plan to build a new well for Westmeath, but that they currently have ice and active users.

“We do have users in our facilities as per now.”

Councillor Olmstead said that the Council “has to start investing”, saying they had suffered from constant issues with the arenas since the Township amalgamated and assumed ownership of the arenas.