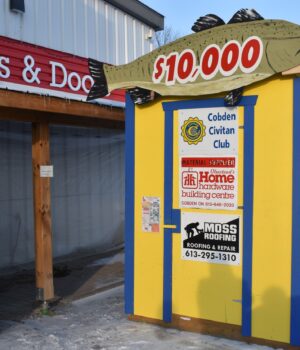 The Cobden Civitan Club held its annual Fishing Derby and 50/50 draw on Saturday, February 5th, an icefishing competition and fundraiser on the Muskrat Lake.

“Tickets are up, enrollment is up. It’s all up!” Civitan President John Cull said.

The event was made into a ‘virtual derby’ last year, with no actual ice-fishing, just the draw and prizes, though this year the event was held proper.

Winners for Largest Trout caught were Dave Cartman in 1st with 31” 1/8 fish, with Al Macdonald and Pat Frasso with the 2nd and 3rd.

Lilly Smith won the Girl’s Junior Derby with a 9” fish, with Katie Rigden tying with her for fish size, and Alexis Malcolm following up with 8” 3/4.

Cull presented a $10,000 cheque to Hospice Renfrew, received by Executive Director Marjorie Joly on February 6, when the draws for prizes took place, posted on the Civitan Club of Cobden’s Facebook Page.